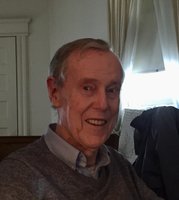 Hugh O. Sweeney Sr., 90 of Maplewood passed away on March 3, 2021 at Winchester Gardens, Maplewood. Hugh was born in Newark and raised in Irvington before moving to Maplewood 60 years ago. He graduated from Montclair State in 1954 with a Bachelors of Arts Degree. Hugh was a Insurance underwriter for Crum and Forster in Morristown for many years. He was a member of the Maplewood Glee Club. Hugh was predeceased by his wife Judy  Ruelens Sweeney. He is survived by his two sons Hugh O., Jr and Daniel C. Sweeney and grandchildren Daniel, Ryan, Claire, Erin and Maguire Sweeney and his brother Phil.