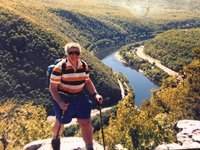 Alfred F. (Al) Tatyrek passed away on March 28, 2021 in Maplewood, NJ at the age of 91.  Born in Hillside, NJ in 1930, to Frank P. and Frances Tatyrek (Luxa), Al had a successful career as a chemist and environmental engineer.  He earned a BS Degree at Seton Hall University (1954) and Postgraduate Degree from Rutgers University (1956-7).  Al was employed as a research chemist at the Bakelite division of Union Carbide (1953-58) and US Radium Corp. (1958-62), an analytical chemist with the US Army (1962-64), a research chemist with the US Army Armament Research & Engineering Centre at Picatinny Arsenal (1964-1973), and a chemical materials engineer with the US Army Armament Research Development and Engineering Center (1973-95).  He holds several US patents and contributed to over 50 science and technology publications. He was selected for inclusion in Who’s Who in Technology Today and American Men and Women of Science and three times elected the president of the Picatinny chapter of Sigma Xi, The Scientific Research Society.

An experienced mountaineer, Al led climbing expeditions in the US, Canada, Europe, and Africa including Mt. Kilimanjaro, the Matterhorn, Monte Rosa, Mont Blanc, and peaks in the Peruvian Andes in South America and in the Northern Cascades in Washington State.  He was a senior member of the National Ski Patrol, the Alpine Club of Canada, the Appalachian Mountain Club and the Sierra Club.  He was a first aid instructor with the American Red Cross in Essex County, a certified NAUI scuba diver, and participated in underwater photography expeditions in the Caribbean and South Pacific coral reefs.  Last, but certainly not least, Al was a skilled magician and lifetime member of the International Magicians Society.

“Seek out and meet the challenges of life, not as distasteful burdens but as true opportunities upon which to build where others have failed or left off, using all the infinite resources that God has given to us.”  Al was laid to rest beside his parents at Hollywood Memorial Park, Union, NJ on Thursday, April 1, 2021.