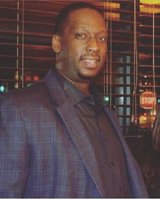 Jamil Bashir Gilmer, aka “Jam,” was born on Monday, November 17, 1975, to Wesley Gilmer and the late Kim Renee Gilmer of South Orange, New Jersey. Quietly on Monday, March 22, 2021, Jamil transitioned to be with his Savior, Jesus Christ.

Jamil Bahir Gilmer, lovingly known by his family as “Jam,” and friends who called him “Mil,” grew up in Newark, New Jersey. He attended the Newark Boys Chorus School, where is was a member of the Chorus. Jamil attended and graduated from Colombia High School, Maplewood, New Jersey, in 1992. In 2018 he enrolled in Phoenix University to begin his studies in Business Management.

On April 19, 2002, Jamil met his wife-to-be, and on June 1, 2003, he married his love, Ayesha Gilmer. He affectionately became a father to Aliyah, Tanazsha, and Terrell. In 2005 Jamil and Ayesha purchased their first home in Plainfield, New Jersey, for their family. In this home, there was lots of laughter and lots of love. The family would take family trips by driving to Myrtle Beach, amusement parks, Lakes, and some parts of the Carolinas, or taking short local trips as a family.

In 2003 Jamil accepted Jesus as his Lord and Savior Jesus Christ. On September 7, 2003, he and his new bride were baptized together at New Life Family Bible Church, Newark, New Jersey.

Jamil Bashir Gilmer loved to visit and spend precious time with his parents in their South Orange home; he was often the cook known as the grill master during family cookouts. He enjoyed seeing his family come together in one central place.

Jamil Bashir Gilmer’s favorite activity was spending time at home with his family. He also loved to play golf and baseball. He was a member of the Reservoir Dogs Baseball team of Somerville, New Jersey.

Jamil Bashir Gilmer was employed at American Institute, where he was employed for 12 years. After starting with the school in Clifton, New Jersey, he began to grow with the school. As he continued to grow with the school, he transferred to the Toms River location, and in 2017, he moved to the Somerset location, where he became the Campus, President. He loved to see students engage and interact within the community. He loved to see the students proudly practice their new skills and receive praise for doing well. He was very passionate about what he did at American Institute. He loved to see people grow and learn and change positively. Jamil was loved and admired by all who worked for him, where he motivated them to be the best they could be while working for the school.