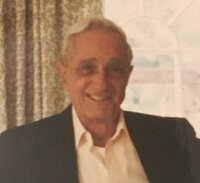 For John’s friends and loved ones who are unable to attend his Funeral Mass in person the Mass will be lived streamed please click on link  https://client.tribucast.com/tcid/2336695691

The Burial with miliary honors will be lived streamed also please click on the link: https://client.tribucast.com/tcid/506695900

John was a native of Millburn, NJ and resided there until 1960 when he moved his family to Summit, NJ.  He resided in Summit with his wife until his retirement.  In 1988 they moved to Florida.  A humble member of the “Greatest Generation,” John was a veteran of World War II.  He enlisted in 1943 and during the war he served in the Third Armored Division, landing at Omaha Beach on D-Day with the 143rd Signal Co.  His interest in communication continued after he was honorably discharged in 1945.  He was granted the Purple Heart after he was injured in a bomb explosion, however, he declined acceptance of the award, stating that a number of his comrades had made greater sacrifices than he.

John attended Seton Hall University from 1950-1952, majoring in Communication Arts; however, as a newlywed and, with the onset of fatherhood, the pursuit of his dreams in radio and television ended.  Instead, John began his career as a postman and became one of the most beloved letter carriers in the Millburn Post Office, where he was employed for thirty-six years.  His communication skills served him well with all of his customers.

“Above all, John was a devoted husband, father, grandfather and great-grandfather.  He loved to share the simplicities of life with his loved ones—his humor, his laughter, his memories and his love of fishing.”

Relatives and friends are invited to attend the Funeral Mass at St. Rose of Lima Church, 50 Short Hills Ave., and Short Hills on Wednesday, September 8th at 10:00 a.m.  Interment to follow at Gate of Heaven Cemetery, East Hanover.  In lieu of flowers, donations to Tunnel to Towers or Wounded Warriors would be appreciated.