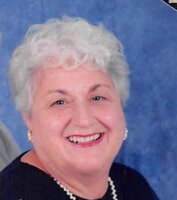 Born in Orange, New Jersey, Grace lived in Maplewood for many years, raising her family there.  She later moved to Brick Township, NJ and spent the last several years in Fort Lauderdale, Florida.

Grace was an intelligent woman with a quest for knowledge.  Having been denied the opportunity to attend college at a young age, she never lost that desire and later attended Ocean County Community College, making the Dean's List her first semester.  Grace learned to read Braille, studied Spanish and was a licensed Real Estate professional.  Even in her final days, nurses would comment on her intelligence.

She was preceded in death by her parents, Maria Grace Palladino Rajoppi and Charles Rajoppi, Sr., her brother Charles Rajoppi, Jr. and her beloved husband of 51 years, Dominic Louis Durando.

She met her beloved Dominic while both competed in the Roller Derby in the early 1950's.  "Jalopy Rajoppi", as her teammates called her, always credited the Derby for teaching her to fall correctly, which was a true benefit later in life.  Grace carried on the long term family tradition of owning and operating the Crest Apartments in Seaside Heights, New Jersey, for many years.  As manager, she played a large part in the creation of lifelong memories for many families of their summer vacations at the Jersey shore.

Her later years were spent in Fort Lauderdale where she enjoyed playing Mahjong, Rummikub, spending time with her friends at the pool, and as an avid reader, always enjoyed a good book.