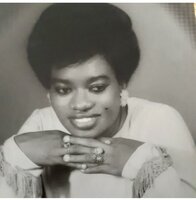 Please Click on link below to join zoom meeting for service

Visitation will be held at First Baptist Peddie Memorial Church, 572 Broad Street, Newark, NJ on Friday, April 29th from 10:00 – 11:00 AM, with a Funeral Service to follow at 11:00 AM. Interment to follow at Rosedale Cemetery, 408 Orange Road, Montclair.

Theresa was born and raised in Port Harcourt, Nigeria and had later lived in Vailsburg, NJ for 33 years until moving to East Orange last year. She started her educations at Port Harcourt Municipal Council Township School, where she attained her First School Leaving Certificate, aka Standard Six Certificate. For her Secondary School education, she attended Archdeacon Ajayi Crowther Memorial Girls Secondary School in Elelenwa. Being a girl of violent passion for the sick, she enrolled into the School of Nursing, Specialist School, now renamed University of Port Harcourt Teaching Hospital, where she graduated as one of the best students after three and a half years of studies. She became a Registered Staff Nurse (RSN) and was retained by the Hospital.

After moving to the United States, she had attended Essex County College and graduated in 1986 with her Associates in Health Services Management, and later graduated from St. Peter’s University in Jersey City with her Bachelors. Theresa then worked as a Licensed Practical Nurse for the University of Medicine and Dentistry in Newark from 1981-2004, and also for Greystone Park Psychiatric Hospital in Morris Plains from 2004-2011.

Theresa is predeceased by her husband Johnny Moore. She is survived by her daughters Tbifuro Moore, Tonye Moore, and Boma Moore, and her grandchildren Evan, Mia and Carter.