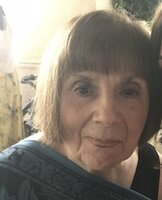 She was born to Angela Caltabiano and Peter Lillo, the oldest of 3 children. JoAnn was born in Paterson NJ and had lived in Short Hills before moving to West Orange 12 years ago.

An avid baker, beader and decorator, she worked at various financial institutions, most recently Smith Barney in Florham Park.

Arrangements by The Jacob A. Holle Funeral Home, Maplewood.