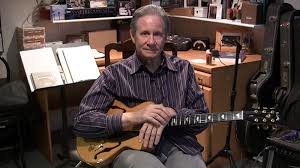 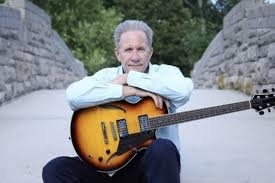 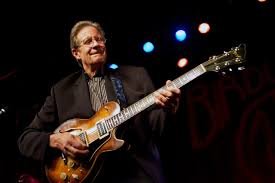 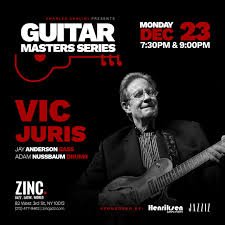 Vic Juris, a guitarist whose stylistic breadth, technical fluency and selfless poise made him a first-rate sideman for more than 40 years, as well as an influential educator and a perennially underrated solo artist, died early this morning at Saint Barnabas Medical Center in Livingston, N.J. He was 66. His wife, the jazz singer Kate Baker, said the cause was complications from cancer. Juris came of age alongside a generation of guitarists broadly conversant in the jazz language, but also deeply informed by rock, soul, and myriad strains of classical music. Within that broadminded cohort, he commanded high esteem. “There is none better,” the late John Abercrombie said of him. Another notable peer, Pat Metheny, once attested that “Vic Juris has been a total monster ever since we both hit the scene at around the same time in the 70’s, playing great no matter what the setting.” Dave Stryker, who for the last 20 years has lived across the street from Juris in West Orange, N.J., characterizes his friend as “a musician’s musician.” Speaking this afternoon from the Juris household, Stryker added: “I don’t know anybody that doesn’t completely give it up for Vic, considering him as one of the masters.” But Juris’ sterling reputation among fellow musicians was disproportionate to his low-key public profile, despite a trail of solo albums stretching back to the late ‘70s. A sideman to saxophonist Richie Cole during that decade and beyond, he also recorded with Hammond B-3 organists Don Patterson and Jimmy Smith, bassists Steve LaSpina and Gary Peacock, and keyboardist Peggy Stern. He’s most widely known for a long affiliation with saxophonist, flutist and NEA Jazz Master David Liebman; they began recording together in 1991. “He should have been more famous,” Liebman tells WBGO. “He played unbelievably. He was not a showy guy, as a person or as a musician. And he was so eclectic — he could do so many things, from left to right, musically. When somebody’s that eclectic, you can come out as lesser in the eyes of the public, when it really is more.” For his part, Juris took pride in the versatility that was a stock in trade. “I wanted to be a sideman and play in as many situations as possible,” he told Claire Daly, in a 2017 interview for DownBeat. “I still do. I find that to be rewarding. The drawback is that you don’t build a profile as a leader. You’re always below the radar and that’s basically what happened with me.” At the same time, Juris held a well-regarded residency at the 55 Bar in Greenwich Village, usually playing with organist Brian Charette and drummer Anthony Pinciotti. And he put out some two dozen albums, more than half of them on the Dutch label SteepleChase. His most recent, from 2019, is Two Guitars; the title is a nod to his use of both a steel-string acoustic and a hollowbody electric. The album, which features an ace trio with bassist Jay Anderson and drummer Adam Nussbaum, is also a showcase for Juris’ compositions, including an Abercrombie tribute titled “To John” and the harmonically sophisticated opening track, “Cerise.” Victor Edward Jurusz was born on Sept. 26, 1953 in Jersey City, N.J., and raised in Parsippany. His father, Victor Sr., was a Port Authority police officer, and his mother, Claire, worked as an executive secretary. He began playing guitar in 1963, at age 10, and got his first electric guitar as a gift the following Christmas. The timing was right for him to cut his teeth on The Beatles, but he also studied privately with jazz guitarist and educator Ed Berg. (He later studied and befriended another jazz guitar guru, Pat Martino, and struck up a correspondence with pianist and pedagogue Charlie Banacos.) “Beyond his initial lessons, he was pretty much self-taught,” Stryker marvels. “He got that experience early on, playing with the real masters of the music. He came about his harmony, which was pretty deep, on his own. He could play the most difficult kind of music — like the stuff David Liebman would write, with these big, fat, stacked chords — and figure out how to voice them on the guitar.” Liebman had a longstanding pledge to do an album of Juris’ compositions. He says that a recording date had been set for February. “Last time I had contact with him was about the rehearsal, and the tunes we were going to do,” Liebman notes, recalling that one of those was a piece called “Romulan Ale.” Juris recorded that tune, whose title alludes to Star Trek, on a 2010 trio album called Omega is the Alpha. Here is footage of him performing it with Liebman’s band around the same time, at the Deer Head Inn in Delaware Water Gap, Penn. Juris was also a committed educator, teaching at the New School, Rutgers and SUNY Purchase. He published method books and instructional videos, and instructed several generations of younger guitarists. Baker, who survives Juris along with his sister, Denise Martish, says that over the last several months — since word of his cancer was made public, through a GoFundMe campaign — a steady stream of his students and peers have come to West Orange to pay their respects. “I think his legacy is also with how many guitarists he’s trained and mentored, from his heart,” she says. “Vic would do duos with them. He would have them come to the house. He wanted to really pass down the information.” Baker also discloses that Juris has two albums releasing in the spring. One, due out on SteepleChase in March, will feature Anderson on bass, Gary Versace on keyboards and John Riley on drums. The other will be a duets album, featuring her vocals and his guitar.
To send flowers to the family of Victor Jurusz, please visit Tribute Store
Friday
3
January