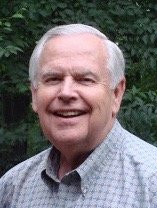 A Memorial Mass will be held at St. Rose of Lima Church at a later date.

John Alan Anderson, “Jack” was born on September 8th, 1937 in Cleveland, Ohio to parents John and Pearl Anderson. He was the youngest of 5 children. Survived by his brother Richard Anderson and sister-in-law Carol. As a young man, Jack attended Case Western Reserve and proudly advanced to work on the world's first computer, the Univac.  His lifetime career in technology continued as he went on to work for RCA and Monroe Systems for Business, where he served on the Board of Directors.

He married the love of his life, Patricia Anne Manning, on August 12,1961, and soon after moved to Short Hills, NJ. They had six children, John Alan Jr. of Chester, James Arthur of Summit, Karen Marie of Califon, Mary Martha of Cleveland, OH, who died shortly after birth, Laura Kathryn of NC, and Amy Louise of NY. Jack was blessed with 14 grandchildren (Sarah, Billy, Samantha, Gracie, John Carlo, Suzi, Michael, Jack, Adam, Charlie, Lucia, Emily, James and Marco) who will forever remember the fun times with grandpa, like tractor rides, cookouts and cider presses.

Jack was a true gentleman with a hearty and contagious laugh.  He was a modest and humble man, a real Christian. Jack was very proud of his Midwest roots and throughout his life made numerous trips back to Ohio, packed up in a station wagon with Pat and the kids.  He loved a good steak dinner with a baked potato and a glass of George Dickel.

Jack was a faith-filled man who never missed Sunday Mass and loved the church organ. He passed away peacefully on Good Friday, April 10, 2020. He is most certainly in the arms of the Lord rejoined with his beloved wife, Pat.

Above all, Jack was a family man, firmly dedicated to his wife, children, and grandchildren. He was loved by all.

A Funeral Mass, Memorial Service and internment will take place at St. Rose of Lima Church, Short Hills, NJ at a later date.

In lieu of flowers, donations can be made in his name to the Fisher Center for Alzheimer’s Research Foundation, 110 E. 42nd Street, 16th Floor, New York, NY 10017. www.alzinfo.org/donate/donation_form

Share Your Memory of
John
Upload Your Memory View All Memories
Be the first to upload a memory!