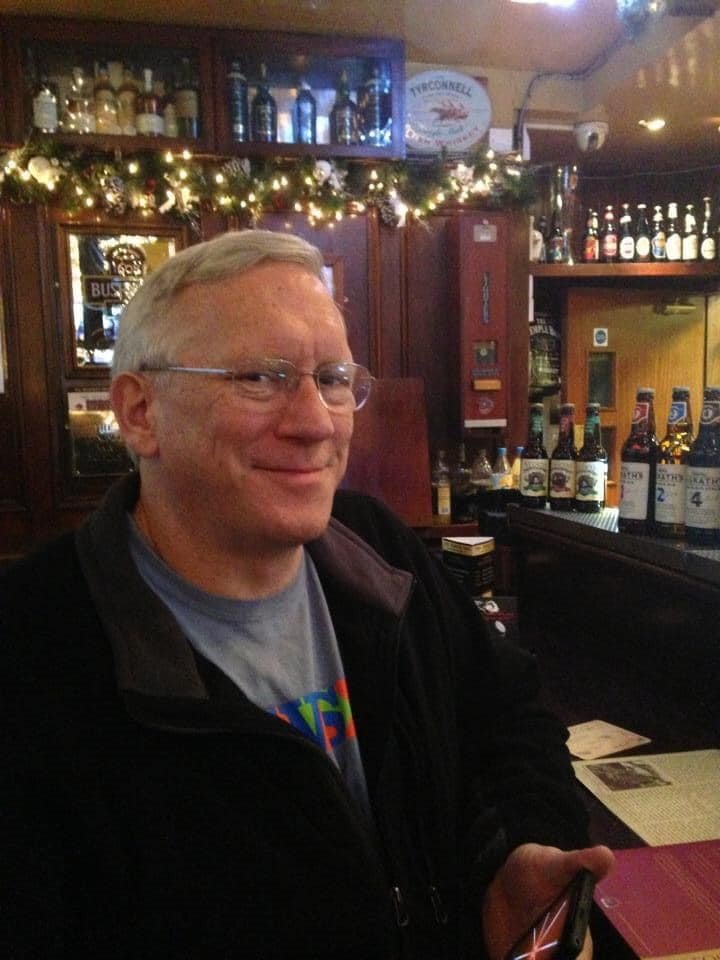 A Memorial Service of suitable size and joviality will be arranged as soon as possible.

Jerry Ryan passed away on May 27, 2020 at his home in Maplewood, New Jersey, after a valiant three-year battle with cancer. He was 59.

Born and raised on “the rock,” Staten Island, New York, Jerry graduated from Monsignor Farrell High School in 1979. He then attended The Cooper Union in New York City, where he earned a bachelor’s degree in Electrical Engineering (Class of 1983) as well as preferential status at McSorley’s Ale House. After moving to Maplewood, NJ, in 1985, he earned a master’s degree in Computer Science in 1987 from Rutgers University. He was completing his doctoral dissertation at New Jersey Institute of Technology when he passed.

Jerry had a genius for friendship. At Cooper Union, he made many lifelong friends, including the “eight guys,” a group of classmates with whom he enjoyed an annual ski trip for more than 25 years. Other long-term friends included members of the Strollers, Maplewood’s community theatre company, with whom he enthusiastically “trod the boards” in productions ranging from A View from the Bridge to The Music Man in addition to serving on the Board of Directors.

Professionally, Jerry spent 15 years as a technical manager and research scientist at Bell Labs, followed by seven years at Avaya and nearly five at Motorola, where he managed the software component teams for some of the earliest Android products, including the Droid RAZR and Droid2Global. At the age of 50, he embarked on a second career as a senior lecturer at New Jersey Institute of Technology, where students consistently lauded him as one of the best lecturers at the school. During this time, he was also a major contributor, community leader, and chief software architect of the PALISADE open source privacy software in the NJIT Cybersecurity Research Center.

﻿In addition to all of this, the bedrock of Jerry’s life was public service. In 1992, after a contentious election and legal fight, Jerry began his service on the Maplewood Township Committee, the youngest person ever to have been elected. Jerry served a total of 19 non-contiguous years on the Township Committee, including three years as Mayor from 1998 through 2000, again the youngest person to serve as Maplewood’s Mayor. Jerry also served 23 non-contiguous years on the Maplewood Planning Board, including five years as Board Chair, a position in which he was serving at the time of his death.

As Mayor, Jerry provided critical support for the establishment of the Springfield Avenue Partnership and the Community Coalition on Race. Among Jerry’s accomplishments in public life were the adoption of Maplewood’s Master Plan, the creation of the Maplewood Arts Council, the redevelopment of former industrial sites on Burnett and Springfield Avenues, the rehabilitation of the Burgdorff Center for the Performing Arts, and the conversion of the former Woman’s Club to The Woodland.

In a speech he gave in 2015, Jerry said, “It has been a blessing and joy in my life to be given the opportunity to serve my neighbors, the people in the town that I live in. To have the support of your family and your friends and your party to be able to help you do this thing that you love doing — it really can’t be described.”

Jerry is survived by his wife, Deborah Gaines Ryan; his daughter, Christina Ryan Finley, and her husband, Patrick Finley; his sons, Luke Ryan and Mark Ryan; his three siblings and their spouses, Jo Anne Ryan Carroll and William Carroll, Denis Ryan and Cher Roessler, and Ellen Ryan Manger and Tony Manger; three stepchildren, Lila, Andre, and Aaron; over 200 beloved aunts and uncles, nieces and nephews, and cousins; and a host of devoted friends.

Interment will be private. In lieu of flowers, Jerry has asked that donations be made in his memory to the following local charitable organizations: the Maplewood Strollers (thestrollers.org), Rent Party (rentpartylive.com), Achieve Foundation (achievefoundation.org), or CancerCare.org.

A memorial service of suitable size and joviality will be arranged as soon as possible. Meanwhile, please send condolences, along with your favorite Jerry stories, to RememberingJerryRyan@gmail.com

Share Your Memory of
Gerard
Upload Your Memory View All Memories
Be the first to upload a memory!