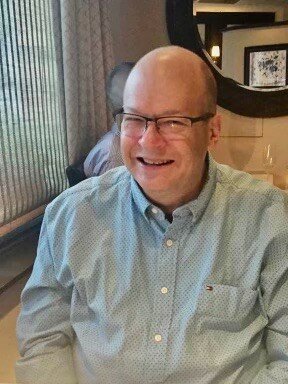 Please share a memory of James to include in a keepsake book for family and friends.
View Tribute Book

James Ralph Purdon III, 66 of Maplewood, died suddenly with his wife by his side on August 26, 2022 from a pulmonary embolism.

The family will be receiving friends at The Jacob A. Holle Funeral Home, 2122 Millburn Avenue, Maplewood, NJ on Friday, September 16th from 4-7 PM. A Celebration of Life will be held at Morrow Memorial United Methodist Church in Maplewood on Saturday, September 17th at 2:00 PM. A Service of Committal will be held immediately afterwards in the Cloister Garden at St. George’s Episcopal Church.

Jim was born in Aberdeen, Maryland and was raised in Stow, Ohio.  He lived in Maplewood for over 25 years. He graduated from the University of Akron with a Bachelor of Science degree in Biology. He received Masters degrees in Entomology from the SUNY College of Environmental Science and Forestry (ESF) and Syracuse University. Jim worked towards a PhD at the University of Georgia in Athens. He worked as an IT Systems Analyst for the Federal Reserve Bank of Richmond.  He was previously employed by the Federal Reserve Bank of New York, Merck, Cray Research, the John von Neuman National Supercomputer Center and ETA Systems.

Jim was a a wonderful husband, devoted son, loving and true brother and loyal friend.  From a young age, Jim was extremely creative, and he spent hours painting, producing graphic art and creating in other mediums.  Jim played the piano and composed his own music.  He was always interested in photography and film making.  Jim loved the water, enjoyed fishing and even built a sailboat from  scratch.  He loved to travel, especially to France and the Outer Banks of North Carolina.  He also loved visits to Japan, West Africa and cruises in the Caribbean.

Reflecting his passion for science fiction, Jim was a member of a Science Fiction Book Club.  He was also an avid participant in a Drone Flying meetup group and a member of Hank’s Wine Club. As a new resident in Maplewood, Jim was an active member of the Newcomer’s Club of Maplewood and South Orange.  He served as Board Parliamentarian and co-chaired the Wine Experience and Antiques Antics groups. He looked forward to the many Monday nights he spent at Sports Night with his friends at O’Reilly’s over two decades.  He was previously an active member of St. George’s Episcopal Church, where he was an Usher.

After suffering a brain bleed stroke on June 25, Jim made great strides in regaining movement and strength on his right side as well as in overcoming aphasia and memory loss.  He was very excited about his recovery, his improvement in mobility and about the therapy he was receiving.  The family would like to thank the staff at Cooperman Barnabas Medical Center, the Kessler Institute for Rehabilitation and Chatham Hills Subacute Care Center for the care and the therapy he received over the past two months.

Share Your Memory of
James
Upload Your Memory View All Memories
Be the first to upload a memory!
Share A Memory