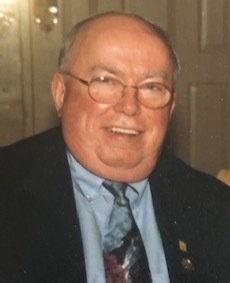 Former Newark Police Chief Thomas C. O'Reilly, 84, passed away at St. Barnabas Hospital on March 28, 2019.  Chief O’Reilly was the Son of James and Josephine O’Reilly of County Cavan, Ireland. A lifelong resident of Newark, he graduated from St. Columba’s School in 1948 and St. Benedict’s Prep in 1952. Appointed to the Newark Police Department in 1956, he received his draft notice and served for two years with the US Army before resuming his duties with the Department. He attained the ranks of Detective in 1960, Sergeant in 1964, Lieutenant in 1968, Captain in 1971, Inspector in 1977, Deputy Chief in 1983, and finally Chief of Police in November, 1992, serving with distinction until retiring in 1999.  Despite his stellar police career, Chief O’Reilly had actually wanted to be a firefighter as a young man. Although life took him in a different direction, he has always had great affection for the Newark Fire Department and an interest in firefighting. Chief O’Reilly continued his education during his police career, earning a B.A. degree from Kean College in 1973 and a Masters Degree in Criminal Justice Administration from John Jay College in 1976.

Proud of his Irish heritage, Chief O’Reilly served as the Grand Marshal of Newark’s St. Patrick’s Day Parade in 1996. A devout Roman Catholic, he attended Mass and read from the lectern for many years at Sacred Heart Church in Vailsburg, Newark. He often spoke of one of the proudest days of his life, when he accompanied Pope John Paul II on his visit to Newark in 1995.

Chief O’Reilly was a member of the Fraternal Order of Police Lodge 12, Newark Police Superior Officers Association, Retired Policemen and Firemen’s Association, and the Emerald Society of Essex County.  He fondly remembers his two young sisters, Claire and Patricia, who sadly passed away at the ages of 6 years and 6 months, respectively. He is survived by his sister Mary Ellen and her husband Joseph P. Vesey Sr., nephews Joseph P. Jr. and Michael J. Vesey and niece Maureen E. Kelly, 4 great nieces and nephews, and his dear friends The McCabe Family: Kathleen, her late husband and Newark Police Officer John McCabe, and their six wonderful children.

Relatives and friends are invited to attend the Funeral Mass at St. Mary's Church (Newark Abbey Church), 520 Martin Luther King Blvd, Newark on Tuesday, April 2nd at 10:30 AM.  Interment at Gate of Heaven Cemetery, E. Hanover. Visitation will be held at The Jacob A. Holle Funeral Home 2122 Millburn Ave, Maplewood on Sunday 2-5 PM and Monday 2-4 & 7-9 PM. In lieu of flowers donations  to the American Cancer Society or the Sisters of Charity of St. Elizabeth, Convent Station N.J., would be appreciated. For more information or to send condolences please visit jacobhollefuneralhome.com.

Share Your Memory of
Thomas
Upload Your Memory View All Memories
Be the first to upload a memory!
Share A Memory
Send Flowers